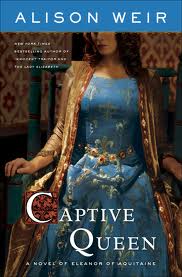 Published in 2010  (Thanks to Goodreads and the author for the free copy!)

It is the year 1152 and a beautiful woman of thirty, attended by only a small armed escort, is riding like the wind southwards through what is now France, leaving behind her crown, her two young daughters and a shattered marriage to Louis of France, who had been more like a monk than a king, and certainly not much of a lover. This woman is Eleanor, Duchess of Aquitaine, and her sole purpose now is to return to her vast duchy and marry the man she loves, Henry Plantagenet, a man destined for greatness as King of England. Theirs is a union founded on lust which will create a great empire stretching from the wilds of Scotland to the Pyrenees. It will also create the devil's brood of Plantagenets - including Richard C ur de Lion and King John - and the most notoriously vicious marriage in history. "The Eagle and the Lion" is a novel on the grand scale, an epic subject for Alison Weir. It tells of the making of nations, and of passionate conflicts: between Henry II and Thomas Becket, his closest friend who is murdered in Canterbury Cathedral on his orders; between Eleanor and Henry's formidable mother Matilda; between father and sons, as Henry's children take up arms against him; and finally between Henry and Eleanor herself.


I have kind of mixed feelings about this book.  I won it in a giveaway from Goodreads, and I was shocked to see how long it was.  The ARC I have is 475 pages but the published hardcover book is 336 pages, so somewhere major cutting was done, apparently.  Hopefully it was in the beginning, because the beginning is the reason it took me so long to review this book!  I almost gave up, because the first few pages were like very bad erotica about evil (read: mean, hateful, violent, and red-eyed) people.  I couldn't STAND Henry, whom Eleanor abandoned King Louis the somethingth for.  I could not imagine why she would choose Henry and commit so many (what she believed to be sins) to be with him.  This made the book very hard to engage with.


However, Eleanor really grows as a character, and I totally enjoyed at least the last half of the book.  I certainly never came to like Henry, but I came to love Eleanor and her maid Amaria.  Eleanor was a strong, brave woman who was subjected to the whiles of men.  Her power struggle was portrayed well, as well as how she coped with the infidelity of her husband.


This book is pretty typical historical fiction about England and France, but then again, I'm not a big reader of historical fiction so I can't really give you more comparison than that.  I did enjoy it, and I would like to see a published copy to see what was changed in the finished book.  I would probably have completely enjoyed this book had it been shorter, but from what I have seen I give it 4 stars.  I probably will never re-read it, but I am glad that I did.  I learned a lot about history and it was fun to immerse myself in the world of kings and queens for awhile.


Give it a shot if it sounds interesting- I'm glad that I did!
Posted by Allison at 10:18 AM