Review of Brightwing to come later this week! 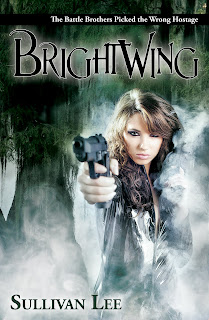 LPFR: Since you usually write books for younger readers, many bloggers may be unfamiliar with you! Can you please tell us a little bit about yourself?

SL: I'm a former newspaper editor, former social worker, former deputy sheriff, current mother, constant worrier, and perpetual writer. Under my real name (Laura L. Sullivan) I write books for children. Under the Green Hill and Guardian of the Green Hill (Holt Books for Young Readers) are about a group of children caught in the middle of a fairy war.  Ladies in Waiting, out next May from Houghton Mifflin Harcourt, is a bawdy historical set in the 1660s England.

When I started writing adult crime novels (hey, I have to put that law enforcement training to use!) I was intrigued by the self publishing world, and decided to experiment. It's going very well so far!

You can find out more about me on my blog, The Omniscient Third Person.
http://lauralsullivan.blogspot.com/

LPFR: Please tell us about your book in just one sentence.

SL: Two criminal brothers on the run get more than they bargain for when they take a female thief hostage.

(Whew! I should note that I'm not good at short. My last contracted book had a 90K word cap and my first draft was 120K. I turned it in at 106K and my poor editor had to do her magic.)

LPFR: I'm guessing your past as a Deputy Sheriff made you interested in the criminal aspect of the story, but what was your inspiration for writing about the indigenous peoples of Florida?

SL: I've lived most of my life in Florida (right now I'm in Kentucky but I'll be moving back soon) and I've always been fascinated with its early history. Florida was, essentially, Clan of the Cave Bear at the beach, with humans living beside mammoths, giant sloths, sabre-tooth cats, and man-eating terror birds. (Even Ayla didn't have to contend with those!)

I've been an amateur fossil hunter for years, and though most of what I find is from animals, I've also found a few relics of the people – beads and arrowheads. Florida has lost a lot of pristine habitat, but you can still find places – especially in the swamps – that are a lot like they were when Florida's first indigenous people were there. (Of course, most of them quite sensibly lived on the coast, or the spring-fed, higher elevation interior. No one in their right mind lives in the swamps if they can help it!) Florida still has a bit of a primal feel, and it never seemed like the paleoindians were too distant.

So when I needed a heroine who was perfectly at home in the Florida wilderness, I looked to pre-history. The Tequesta are a real tribe, but (as far as we know) they died out about 300 years ago. (The Seminole and Miccosukee tribes came later, fleeing from the north, and the Seminoles probably owe their status as the only unconquered tribe to the fact that they moved to the inhospitable Everglades.) I tweaked history to make a branch of the Tequesta line survive to this day.

LPFR: I have to be honest with you- your story left me feeling unsettled.  Without giving away anything, the last third or so of the book contains some surprises (both good and bad, in my opinion), and the last page was not really what I was expecting!  How did you feel about the ending of the book, and how do you expect other readers will feel?

SL: When you write for a commercial publisher, there is a lot of pressure to make your book conform to certain presuppositions. Villains should die (or be defeated until the sequel) and when a couple gets together their emotions should be overwhelmingly happy. That's what they think will sell best – and it probably does. I decided that I needed to tell a different kind of story.

The characters I created in Brightwing are meant to be very disturbing people. And the things they do? As you say, unsettling. They do things which, in other people, would be unbelievable, but which are perfectly in accord with their natures. I wanted to induce strong emotions in the reader – disgust at Mallory's actions, shock at Lucy's reaction to them, puzzlement and sympathy over Edgar's emasculated role. And the ending is deliberately provoking – but again, it suits the characters' natures.

I wrote an alternate ending first, with Mallory dying, but it just wasn't right. When I reworked it, I also saw what terrible wonders he could do in a sequel, so he had to stay. (The sequel, Swamp Bordello, will be out in about a year.)

Most of all, I want Brightwing to be a book people think about long after they finish reading it. Justice and happy endings fade quickly, I think, but if you've thrown a book across the room a time or two – and picked it up again – you'll never forget it.

LPFR: That's funny, because I came close to throwing the book.  I'm glad I didn't, seeing as how I was reading the ebook on my phone.  How did the experience of writing for adults differ from your other writing?

SL: To me, writing for children and writing for adults feels fundamentally the same. Children are slightly less forgiving, and not quite so easy to manipulate as adult readers, but I tell the stories pretty much the same way. I never write down to children, and I never sugarcoat emotions, good or bad. All of my books, I think, speak of the world being an exquisitely lovely place, but terribly unsafe, which children need to learn, and adults need to be reminded of.

LPFR: What are you currently reading?

SL: I just started Kushiel's Dart, by Jacqueline Carey. I'm a sucker for slave-girl and courtesan narratives! It's fascinating that the main character is a complete masochist without being at all weak.

LPFR: What advice do you have for young writers who are trying finish a novel and get it published?

SL: Pretty standard stuff – read everything you can get your hands on. Not every sensitive reader can become a sensitive writer, but I don't think you can be a good writer without being a true reader first.

When you've finished your first manuscript, lock it away and spend the next few months doing research about the publishing world. When you think you're beginning to understand it, edit your book – many times. Put it away and research the market again. Edit again. Then simultaneously start your new book and begin to query agents. You need the new book to take your mind off checking your email every three minutes!

If you decide to go the self-published route, do the same, but double your research time!

LPFR: Thanks for the opportunity to read and review your book!

SL: And thank you so much for having me on La Petite Fille Rousse!