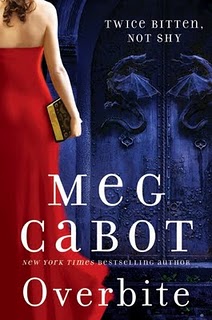 The Insatiable series combines two of my favorite things... Meg Cabot and vampires.  I'm not sure what it is about vampires... There's something so exciting about a super powerful guy desperately in love with an unlikely girl.  Anyways.  Meg Cabot has fun with her vampires, and in Overbite, they get a bit more evil than in Insatiable.

TEASER: "But when he actually saw Meena Harper emerge from a taxi in front of the Freewell, New Jersey, Police Department... he realized that all the worst-case scenarios he'd been imagining came nowhere close to the horror of this one:

There was a pink scarf tied around her throat." p. 48

Insatiable (Book 1, see my review here) introduces us to Meena Harper, resident of NYC with psychic powers.  Meena has the gift to know how people are going to die- this sounds like an awesome power, but it's actually kind of creepy to other people.  Meena is determined to use her gift for good even though it causes some uncomfortable conversations.  She's doing okay until she finds a new boyfriend, Lucien, who happens to be a vampire.  Not just a vampire, but the actual prince of darkness, as in the son of Satan.  (Note: this is still a fun book, even if you don't like horror or super dark books, you would probably still enjoy it.  The evil is played down and the drama is played up.)

Overbite starts with Meena working for the Palatine, happily living with her brother Jon in a secret location... Lucien is in hiding, but Meena tries to remain anonymous in the city, just in case.  She still believes that he has good in him, and she is trying to find information from the Vatican to prove that it's possible.  In the meantime, she has bigger problems.  She has had repeating nightmares about her ex-boyfriend, and she asks him to meet her in the city to talk.  She's in the car with him, trying to figure out how to break the news of his impending death, when the unthinkable happens.  A chain of events is set off involving a desperate mission to New Jersey and corruption in unlikely places.  Through it all, Meena is pursued by the charming Palatine guard Alaric Wulf and the brooding vampire prince Lucien Antonescu.

Overbite is fast paced and full of mystery- the ending definitely surprised me, and there were several plot twists that made me audibly gasp, much to the amusement of my family who was riding in the car with me.  Meena's brother Jon is a really fun character.  In this book, he has been hired to work at a church coffee shop, but he still really really wants to work for the Palatine.  He's come up with a new invention called the SuperStaker (I'll let you read the book to find out more) that's super cool... Meg Cabot doesn't take her vampires too seriously, and the SuperStaker is proof of that.  I'd love to see Edward Cullen (*swoon*) fight one off, haha.

Lucien also goes through major character development during this book.  He struggles with choosing between his father's legacy of evil and the good Meena believes he is capable of.  I like that he is a deeply flawed character, and he visibly struggles with evil temptations.

Even with all of this drama and action, the book is written in Meg Cabot's humorous voice, and the reader will enjoy the light hearted bits interspersed with the moments of darkness.

As I said above, the ending was unexpected, and I'm not sure what's going to happen with the series. Is there going to be another book?  I can't find the info online, but if you know, please leave a comment.  EDIT: According to commenter below, this is the last book in the series.  :(  Bummer for me.

Four stars to an excellent sequel with humor, intrigue, and the ultimate triumph of good over evil.

Meg Cabot's website has some fun extras, including links to Palatine publishings and excerpts.


The book trailer is HILARIOUS.
Disclaimer:  I received this book from the publisher in exchange for an honest review.
Posted by Allison at 8:00 AM