Belated Books-- Glowing Hands, Scary Knives, and a Delicate Girl: Review of I Am Number Four by Pittacus Lore 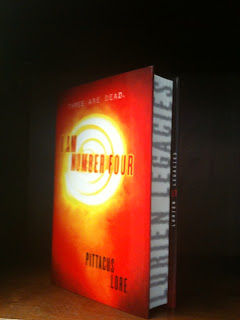 In case you missed it, this book was made into a movie very soon after it was published.  Goodreads says it was published in August 2010, and the movie came out February 2011.  Wow- maybe I'm missing something, but that's really fast turn around time.  I saw the movie and liked it, but I wasn't fully convinced to love the story.  I did, however, really enjoy the book- I found the book to be a 4.5, and I would recommend it to readers who like YA adventure.  The writing is mature enough for adult readers, and the book is "safe" to recommend to friends and family who scoff at vampire books.  Aliens are cool, right?

Basically, "John Smith" is a humanoid alien from a beautiful planet that was invaded by the greedy Mogadorians.  His people sent nine children and their guardians to Earth in an attempt to keep them safe.  Before they left, a spell was put on them so that they could only be killed in a specific order.  The child was was Number One had to be killed before Number Two could be hurt, etc.  This book begins when Number Three is killed, meaning Number Four aka John is next in line.  He and his guardian move to Paradise, Ohio, where John makes a couple of new friends, including a nerdy boy who believes in aliens and a lovely ex-cheerleader who enjoys photography.  Despite John's enjoyment of his new town, the threat of being caught or having to move always looms over him, particularly as he starts to develop his super powers ("legacies").

The movie kept most of the premise the same, but I was pleased that the actual super power/action/thriller scenes are much better in the book.  For example, there's a weird thing about these magical geodes in the movie, but that's not part of the book.  The book is also over a longer period of time, which allows for more character growth, both of John and the supporting characters.  Basically, the book is richer with more detail and background about why things are the way they are.  Interestingly, I don't think a physical description of John is ever given- but I just pictured Alex Pettyfer in my head and hummed "Rolling in the Deep," which was quite enjoyable.

Some other reviews I read found the book boring, but I enjoyed the relaxed style.  There were funny things and quirky moments- John's guardian can't get the hang of cursing in English, so he occasionally swears using the wrong words for the phrase.  While some of the characters are naturally "cooler" than others, they all have their moments of importance to the final outcome of the story- they can make good and bad choices, but none of them is helpless or without impact.

I can't get out of my head these awesome flashbacks that John has when he mentally travels back in time to his home planet and he views the destruction as well as his family.  His planet was suspiciously Earth-like, but a fantastical version with shape-shifting animals.  There's a subtle message about caring for our planet- contrasting his people, who made environmental concerns their priority after almost destroying their planet, versus the Mogadorians, who used up their resources, then John's planet's resources, and now want to use up Earth's resources.

The book was well-paced- I read it in a day or two without growing bored or grouchy.  Scenes of intense action and drama are interspersed with brief, more mundane, daily life scenes, which gave me time to relax and showed what life might be like for an alien living in Ohio.  This was a great book for vacation because it kept me engaged while reading but I didn't shout at people who interrupted.

The end of the story clearly opens up for the next book, The Power of Six, which comes out August 23.  I will be reviewing it soon, so be on the lookout!

There's also a short eBook on Amazon that tells the story of Number Six- apparently it's very short, just a bonus material book.

I checked out this book from my local library.