Review of Bumped by Megan McCafferty 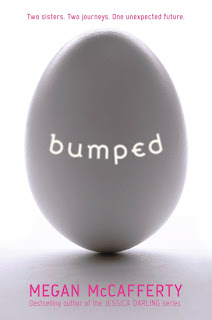 Bumped is a hilarious, tongue in cheek dystopian novel about a pair of twin sisters living in the futuristic United States.  The premise is that a virus has made everyone over 18 infertile, so teenagers are actually encouraged to "bump."  Many teenagers donate their "preggs" to childless couples or pregg for people that they know, but there are actually professionals who pregg for money.  Melody is one of these girls.  Her adoptive parents have taken her perfect genes and given her every physical advantage, and she has signed a major contract with a wealthy couple.  The only hitch is that the future parents can't seem to find the perfect male, and Melody is getting anxious.  Her parents would like her to have two if not three preggs, but at this rate, she might not even have one!  There's another problem: she has a complicated relationship with her best friend Zen. Of course.

To make things more interesting, Melody's twin sister, who seems to be hiding something, shows up on her doorstep to convert her.  Harmony has grown up in a super-religious compound sort of society (this vaguely reminds me of the stories of teen brides in extremist Mormons).  The religious aspect of the book is very weird, because it is changed from actual Christianity in some ways but not in others, which just gives it a very weird vibe.  For example, there are some quoted scriptures that I look up- they are changed a little bit and taken out of context, but still reflect the original verses.  It's just hard to put my finger on how I feel about this aspect.

The one complaint I had about the book was the ridiculous slang and coined terms, similar to high fantasy novels where there are 40 characters with "fantasy" names involving combinations of letters that I have never seen despite living in one of the multicultural hubs of the country.  In the first three pages, we have "Mi-Net," "Tocin," "neggy," "pregg," "fertilicious," and "omnicide."  You can pick up on the meanings of the words from context, but until you get used to the strange language, this book is a little hard to follow.

Overall, I enjoyed the book, and I would recommend it to anyone interested in a lighter dystopian novel.  It's a pretty fast read and definitely funny.  I give it three stars.  Learn more at the author's website here.
Posted by Allison at 7:00 AM

Email ThisBlogThis!Share to TwitterShare to FacebookShare to Pinterest
Labels: dystopic, funny, series, YA